Next big project is planned for April 2019. „Thunda down under“ in Australia will be held in April this year. I am going to catch up with Mathias Gärtner in Sydney then driving all the way up North to the launch site. Around 1000km are lying ahead of us. Also I still have to build my model for this launch. More information about the launch: https://thunda2.com.au/

Rocket for this launch will be a Fusion Arrow X. I am planning to build this model during the next weeks in January 2019. Pictures will be posted here. Here some information from the fusion website: http://www.fusionrocket.biz/

Scott send me the kit in really good shape and all parts are laser cut and look pretty neat. All parts were wrapped in paper separately so I unwrapped them before.

13.01.2019 – just coming back from Halberstadt visiting Rolf Stabroth. In his rocket booth we accomplished some milestones this weekend and nearly completed the kit.

The kit was easy to built. All parts fitted nearly perfect together. Only a few parts needed a bit sanding before. The manual was some kind of confusing with the e-bay assembling part. But in the end we did that in some way. I used a Altimax Simply for dual deployment. Pilot chute will use a conventional blackpowder charge for deployment at the apogee and 150 meters above ground the main will (hopefully) pop out with a CD3 from Rousetech using a CO2-capsule.

Four days of insane high power rocketry flying. I had no probems at all to carry the rocket to Sydney. No Problems with the Airline and no problems at customs.

The way to Funny farm was exciting and challenging as I had to learn to drive on the left side with a Right handed car and not a small one.

We had to bring everything with us, starting by water and ending by the rockets of course. We arrived at Funny Farm on April 18th, 2019.

On April 19th, 2019 the first launch of the ArrowX was on a Aerotech J350W with dual deployment using an Altimax Simply. We had to wait for the igniters from Blake so the prepping could start at least on Friday. But then all went well and the ArrowX had a beautiful first flight.

Second flight was planned on an CTI-K 54mm motor but unfortunately the motor did not fit into the motor mount. So after a lot of sanding I was trying to switch to another motor but the Aerotech Single Use K did not fit, either. Eventually I had to buy another J motor that fits in my 38/720 casing as the rocket was already prepped and I wanted to fly it by any means instead of unprepping it again. I got an AT J500 Green Mojave from Blake and that motor is a beauty when lifting off.

Unfortunately the Main chute was ejecting at apogee and the rocket drifted over two kilometers away. I had a bearing but could not find it due the passing daylight. On the next day we searched for it with four people and were able to recover it. The rocket suffered major damage due to the nightly humidity and the wind dragged it over the sandy field so it was scratched all over.

The Binder Design Excel is a little beauty midpower-rocket. I built it together with my daughter to have something to fly F und G-motors. First flight was at RJD 2017 and also at RJD 2018 the Excel flew succesfully. Firstly on RJD 2018 a little usb-camera-stick was onboard the rocket. Additionally an action-cam filmed at close proximity.

Another big project was a BSD Diablo 5.5. I purchased the kit directly from BSD High Power Rocketry 2006 in the US. The kit was easy to built and was already complete with decals. BSD manufactured the best rockets kits on the market that time and for resonable price. I was planning to fly this kit with dual deplayment but in the end I had not enough space for two chutes and a big motor. Also it was not easy (and short big rockets are never easy to fly) to make it stable. I needed to put a 1.3kg mixture of resin and sand in the nosecone to push the center of pressure a bit more away from the center of gravity to have safe and stable flight with a big 54mm motor.

Here are some Pictures from the Assembling:

As you can see on the pictures (Thanks to Tom Stach for these awesome picture series!) it was a beautiful flight but I wanted to safe some bucks on the shroudlines and took cheaper ones. So due to bad (or not appropriate) quality of the shroud lines the motor ejection burned through it. The nosecone separated and the chute went away at about 1000 meters by the thermic air and was not seen again. The rest of the rocket was coming in ballistically. Fortunately the nosecone was separated from the rocket body, so I could recover the body nearly undamaged. The nosecone needed to be digged out ouf 50cm deep soil, but was (besides the paint) also in good shape as it was nearly solid filled with resin and sand. 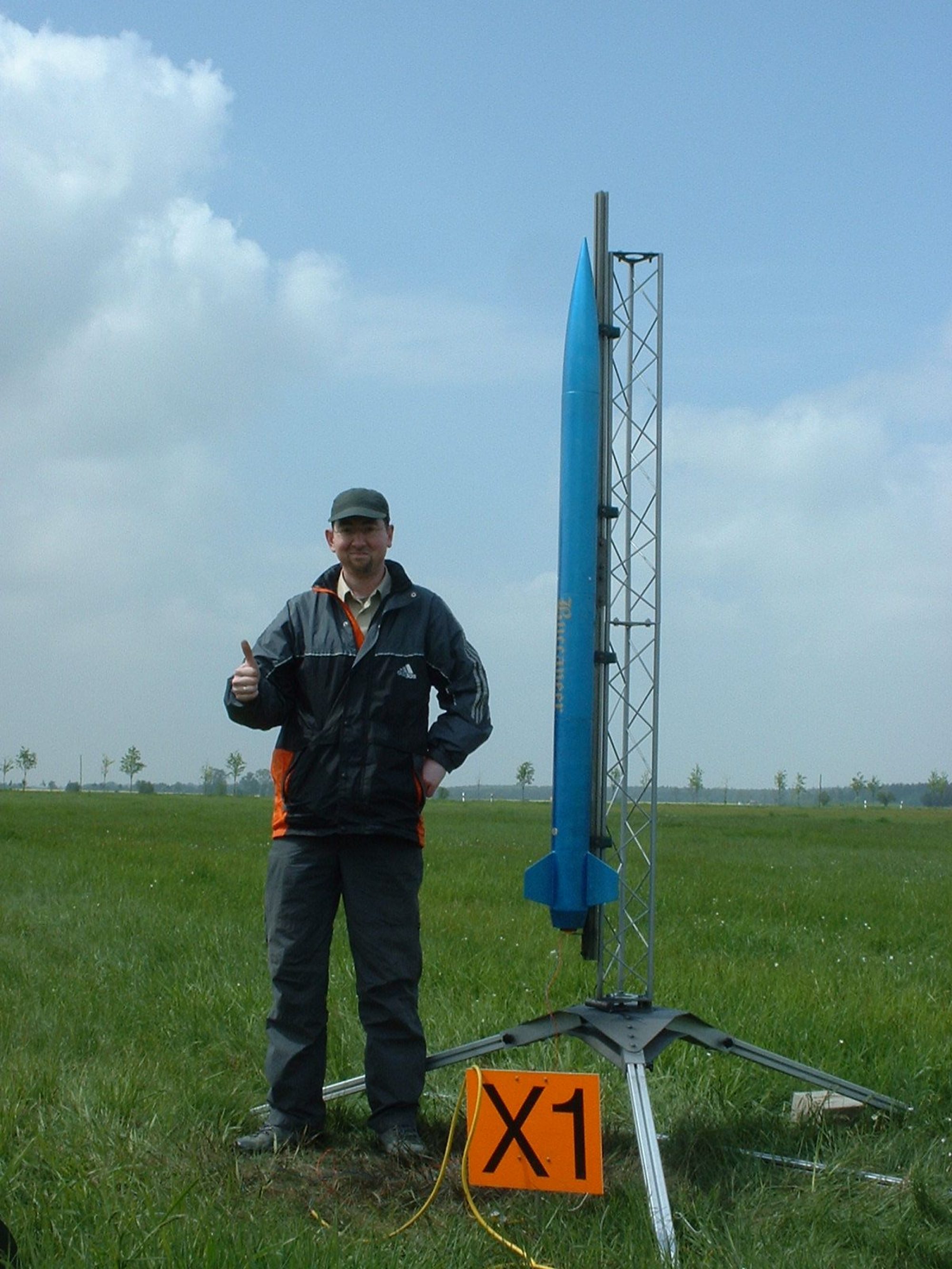